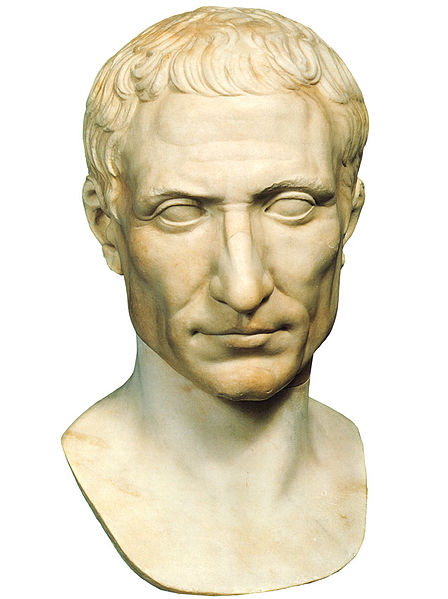 We’re in July, the month created by the Roman Senate and named after Julius Caesar.  It was his birth month: he was born on July 13, 100 B.C.E. Julius Caesar established the powerful Julio-Claudian dynasty, which was to rule one of the greatest empires the world has ever seen until the death of Nero in 68 C.E.

Technically, Julius Caesar never became emperor – we all know that, shortly after becoming “Dictator for Life,” he was murdered on the Ides of March in 44 B.C.E. by members of noble houses who believed (probably correctly) that he was planning to establish himself as emperor.

Rome was a republic then, after having rejected the rule of kings in a long and bloody civil war.  His adopted son (and biological grand-nephew) Augustus, however, would cunningly (and sometimes brutally) make his way to emperor. More on Augustus, appropriately enough, in August.

Multiple sites in Rome affiliated with Julius Casear still remain. The Roman Forum’s Curia Julia was built by Caesar to replace one that had burned. You may recall, however, this is not where Caesar was assassinated (Shakespeare got it wrong!)

The Curia Julia was under renovations when he was assassinated, near Largo Argentina, where the Senate was temporarily meeting in the Theater of Pompey.

The Forum of Caesar, directly behind the Curia, was the first new forum to be built. Caesar spent a vast fortune to acquire the land, which was prime real estate as it directly abutted the Roman Forum.

The creation of this new forum demonstrated the wealth and power of Caesar.  It also spread his propaganda that he was a descendant of the goddess Venus.  Indeed, the great temple in the Forum of Casear was devoted to Venus Genetrix.

But it’s also interesting to note that Caesar specifically had his forum designed to generate income, as a large section of it was dedicated to shops.  (A great way to experience the Forum of Caesar is the computer-generated sound and light shows during the summer).

The Temple of the Divine Julius, built by Augustus, stands in the Roman Forum over the funeral pyre where Caesar’s body was cremated. The law at the time of Caesar’s death said cremations should take place outside the city walls for health and sanitation reasons. But Caesar’s remains were instead cremated here, in the heart of the city — such was his popularity among the common people.

What is still amazing to me is that, even today, almost 2,000 years since Caesar died, people still place flowers here.